I split my thesis project into two parts; for the first, having noticed a similarity between Alternate Reality Games and Paranoid Fiction, researched the two and wrote an article length paper arguing for their shared tropes. The abstract is as follows:

Paranoid fiction, like any other form of genre fiction, exhibits throughout its works a set of theoretical concepts and tropes that help to define its form. Unfortunately for paranoid literature, these tropes have hindered its reputation, and prevented it from attaining the level of respect enjoyed by various other literary genres. After cataloguing a number of these tropes and detailing the way in which they limit the genre, this paper explores the existence of similar tropes and patterns in alternate reality games, which appeared for the first time in the early 2000s. These parallels will be discussed in relation to the affordances of alternate reality games and how they, in some ways, break through the ceiling that paranoid literature has innately created for itself.

For the second part, I used the knowledge that I had gained through my research to design and prototype an ARG-like game using the in development augmented reality browser, Argon. It was my intention to create an entire game that countered several ARG tropes, such as the necessity for group intellect, and the overt focus on the paranoid, but ended up, due to my need to keep its scope manageable, attaching myself on to an already existing project, the Auburn Avenue Digital Media Initiative. The end result was an ARG-like, mission based pervasive game, that totalled 5 separate experiences, blending social media, image recognition, HTML, CSS, Javascript, and more.

If you are interested in hearing more about my thesis, or would like to read it, get in touch and let me know. 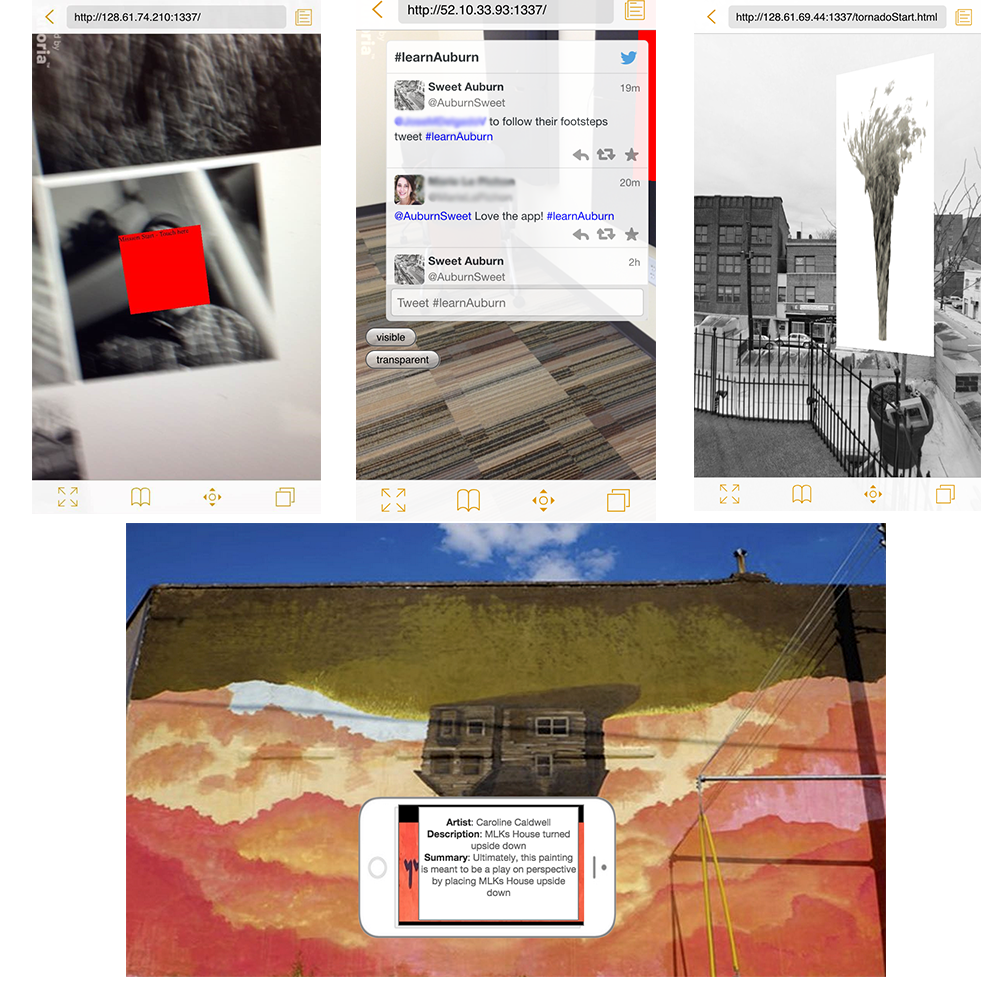 Screen grabs of varying portions of the Augmented Reality locative based game. The first image depicts what a mission start would look like using image recognition. The second displays an overlay of tweets in game, allowing players to easily join in on conversation surrounding what they've learned. The third image depicts a re-enactment of a real live Atlanta event - the tornado outbreak of 2008. The last image is a mock-up of an unfinished portion of the project -- an interactive art tour through Sweet Auburn.